This Thursday I was lucky enough to take a trip to the Jo Malone store for the Poppy & Barley Launch night. *PR EVENT* I mean who doesn’t love a glass of fizz and all the unreal Jo Malone scents after a busy Thursday at work…

On arrival to the Jo Malone shop in Aberdeen we were greeted with a nice glass of fizz and made our way straight to the new scent of Poppy & Barley. This scent is definitely up there for my scent of Autumn. With notes of Poppy, Barley and a top note of Blackcurrant it is described as being “taken to the heart of an English meadow during the harvest.”. 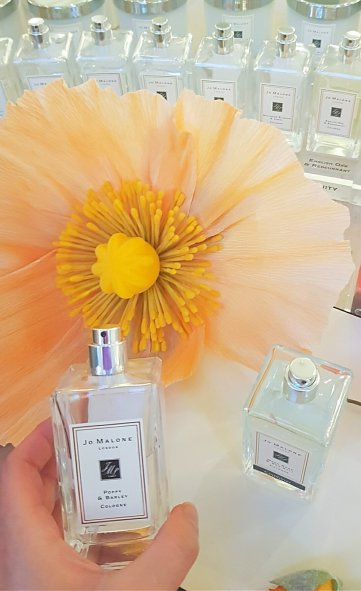 Initially launched last year as a Limited Edition but due to its overwhelming popularity, has now been brought back as a permanent addition to the Jo Malone Cologne line.

We were also all treated to a Scented Experience with the most relaxing hand and arm massage with the Poppy & Barley Body wash, layered with the Sea Salt and Sage and Tonka Body cream and to finish up a spritz of the Poppy & Barley Cologne. Leaving the shop feeling pampered and smelling super floral – the dream.

I had such a fab night learning about how perfectly all the scents can layer together to create your own bespoke cologne.

Thank you soo much to everyone at the Aberdeen Jo Malone store for having my friend and I along to the launch event. We had such a great night!

What is your favourite Jo Malone Scent?